The Story Behind Gig Disks 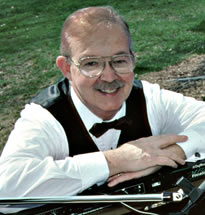 (Mar 2003) While playing a music job one night at the local Blood & Guts Saloon, I realized that I had too many style files on floppy disks, many of which sounded great, but it was difficult remembering which song they sounded best with. Consequently, upon returning home, I began categorizing this huge compilation of style files, then renaming them with the song titles for which they were best suited.

After about five hours of playing different style files with the PSR-2000, renaming the style files to song titles, then adding the OTS settings, I came up with a floppy disk of third party styles that could be quickly accessed, loaded into the keyboard, and within seconds, you were ready to play the next song.

For those who play professionally, you are keenly aware that there's absolutely nothing worse than dead time--time between songs that is wasting away while you're busy punching buttons to get to the next number. It's especially bad when you have a dance-floor filled to capacity with party goers who think that 30 seconds between songs is a lifetime. The gig disk eliminates dead time, keeps everyone on the dance floor, and when things are going smoothly, makes the night seem a lot shorter. That four-hour gig goes by in the blink of an eye.

I sincerely hope those of you that have the opportunity to download and play the selected style files have as much fun playing them as I did making them. I would like to express a special thanks to Joe Waters for allowing me to upload them to his forum and providing many great style files, and Graham Crosby and Will Stewert for providing a large number of style files from their archives.

In August 2013, Gary moved up to the new PSR-S950. As it turns out, most of the gig disk styles from the 3000 worked just fine on the new S950. Rather than create a whole new set of gig disks, Gary very generously provided forum members with the contents of his current USB drive. That included the styles Gary is currently using as well as 30 some S950 registration files. There were some duplicate folders and some duplicate files on that full USB collection. I have removed the exact duplicates and am providing the trimmed version of that USB drive below. It includes nearly 1,000 styles. Many, of course, may be duplicates of styles found elsewhere on this site, but it does provide a nice collection of styles you may find suitable for your own playing. While Gary is playing an S950 now, these styles should work fine on other Yamaha keyboard as well, although the registrations are S950 specific. -- JW

The styles are zipped into single files to facilitate their download.  Unzip them to create a working copy of Gary's Gig Disks. All Gig Disks include OTS with all the styles.  There are also some versions without the OTS for earlier keyboards. (You can use Michael Bedesem's MidiPlayer program to remove the OTS from the more recent Gig Disks if needed.)

If your keyboard is earlier than the PSR-2000 and does not use OTS, or if you'd prefer the styles without OTS, I have converted the first 9 Gig Disks to versions without OTS. You can download them here:

(Nov 2004) For PSR-3000 owners, Gary has sent in two registration files with 8 Christmas songs in each: The first one has Blue Christmas, Frosty, Have Yourself a Merry Little Christmas, Holly Jolly Christmas, I Saw Mommy Kissing Santa Clause, I'll be Home for Christmas, Jingle Bell Rock, and Let It Snow. The second file has: Rock'n Around the Christmas Tree, Rudolf, Santa's Coming to Town, Silent Night, Silver Bells, White Christmas, Winter Wonderland, and The Christmas Song. Both registration files are in this zip file:

If you don't have a PSR-3000, you can't take advantage of the registration files above. So I have converted those 16 Christmas registrations into another Gig Disk with 16 Christmas songs from Gary. If you have another keyboard, simply convert the styles (use Midiplayer) to run on your keyboard. Here's Gary's 3k gig disk. (Note that Gig Disk #7 above is also a Christmas gig disk for 2k owners.) - Joe Waters

If you are using an external style, you create your Gig disks by putting all these external styles together on a floppy disk. If, however, you are using preset styles, you can also prepare songs in advance using the Music Finder database or by setting up registration files. Gary has updated his Music Finder Database, with nearly 500 records, for the new PSR-3000. Click Here to download and try out Gary's Music Finder settings.

The Music Finder does not give you a lot of control about the settings, however. You can adjust the tempo and the introduction used, but that's about it. Everything else is provided by the preset style. In a registration file, however, you can control almost all aspects of the keyboard, so you can set not only the tempo, but the particular voices themselves not only selecting the instruments for main, layer, and left, but also tuning the voice the way you want. Gary has set up a lot of registration files to use in his performances with the PSR-3000 and he has been kind enough to share them with YOU. In late May, '05, Gary sent me 15 registration files. Each file represented a particular category of songs, e.g. SLO 50s, for slow songs of the 1950s, with a different song setup in each of the 8 registration buttons. 15 files, 8 songs per file, that gives you 120 different song setups. Registration files are not very big. In fact, they are a far more economical way to store settings than saving an entire style. I have included ALL of the registration files in a single zip file. Double click the zip file below to download the registration files. (By the way, that zip file also includes Gary's SETUP.REG for setting up the standard parameters he uses when he plays.)