The new Yamaha mid-range arranger keyboards, the PSR-SX900 and PSR-SX700, will replace the current PSR-S975 and S775 models. These new models incorporate many features from the new flagship Genos keyboard that are not available in the current PSR-Sxxx series and thus mark the next generation of Yamaha keyboards. Here are some of the new features in these keyboards: 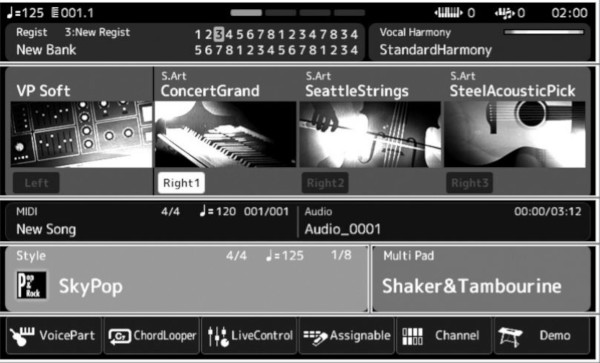 This new display also highlights several of the new features. The midrange models now have a third right-hand voice. The bottom line of the main display contains the shortcut icons which let you call up various functions with a single touch. Touching a shortcut icon calls up the display of the corresponding function. Other new unique features include:

Additional Styles for the PSR-SX900/SX700

(Dec 2019) I just spent quite a bit of time sorting thru styles from earlier keyboards (PSR-3000/pa3x thru to PSR-S970/Tyros5 factory styles.) Basically, I deleted all the duplicates and came up with a set for the PSR-SX900 that I would like to share with sx owners. There’s around a couple of hundred that aren’t on the sx900. Basically all sorted, most sound really good. To simplify download, the styles are divided into zip files in 12 categories.

These elegant, all-in-one instruments, which replace the PSR-S775 and PSR-S975 respectively, inherit inspiring content and powerful features from Genos, the world's most advanced Digital Workstation keyboard. Just as Genos set a new standard when it was introduced by the company last year, the new mid-priced keyboards are poised to raise the bar for workstations at more affordable price points, making it even easier to streamline creative flow, transform musical ideas into fully-arranged productions, and to recall them at the touch of a button.

How an Arranger Workstation sounds, and the ease with which the user can control these sounds, are critical considerations to the creative process. The PSR-SX700 and PSR-SX900 offer unmatched ultrarealistic and expressive Super Articulation Voices, with greater real-time control over a performance than other similarly-priced keyboards on the market today.

Both share a brilliant 7-inch TFT touch screen that incorporates the same intuitive graphic user interface offered on Genos, allowing users to easily navigate Voice and Style assignments, as well as assess and adjust other settings.

Six new assignable controller buttons have been added beneath the touch screen, each of which can be assigned a desired function. Simply pressing the button during a performance or composing/arranging session enables the user to jump directly to relevant controls in the display.

A new joystick controller with modulation hold opens up expressive possibilities and is ideally suited for almost every genre of music.

Built-in content from the Yamaha Voice & Style Expansion library provides instant access to a huge variety of international content. Expansion memory size has been greatly increased in both keyboardsto 400MB in the PSR-SX700, 1GB in the PSR-SX900allowing users to further customize their instrument by adding their choice of content from YamahaMusicSoft.com

New Voices and DSP have also been added, inherited from Genos. To complete the creative process, arrangements made with the 16-track recorder/player can be output as studio-quality WAV audio files to play back on smart devices or computers.

The PSR-SX900, which incorporates a newly-designed, bi-amped speaker system with a wide stereo audio field, is the new flagship of the PSR-SX line. It boasts 4GB of internal memory, 1337 instrument Voices, 56 Drum/SFX kits, and 480 XG Voices, as well as 329 Multi Pad banks. To ensure silky-smooth, high-quality sound, the DAC (Digital Audio Converter) on this keyboard has been upgraded to 32-bit, the same as those found in Genos and in the top-of-the-line Yamaha MONTAGE synthesizer.

The PSR-SX700 includes many of the same features at a lower price point, and boasts 1GB of internal memory, 986 instrument Voices, 41 Drum/SFX kits and 480 XG Voices, as well as 5 insert effect slots, 226 Multi Pad banks, Main L&R line outputs and one USB to device port.

"Performers and writers will be very impressed with the breadth of new content, customizability and expandability found in these keyboards," said Ben Harrison, marketing manager, Digital Piano & Portable Keyboard, Yamaha Corporation of America. "The PSR-SX series represents some of the most powerful songwriting tools around. Using these keyboards, songwriters can get from an idea to a fully arranged demo faster than ever, and performers can get the room moving in no time."

As with their predecessors, both new keyboards can be used with the optional Yamaha KS-SW100 subwoofer, which makes the already powerful onboard speaker systems sound even bigger.