In the Preset Voices lesson, when you tried out some voices, I asked you to make sure that the ACMP button was OFF. Why is that? If ACMP is ON, your keyboard will be split into two parts. Keys on the left side are used to indicate a style. If you tried playing notes with your left hand, you may have been surprised to discover the rhythm and other voices kicking in. If you pressed different notes with your left hand, the sound may have changed, but in strange ways not reflecting the actual notes you were playing, unlike the right hand. To play all 66 keys as a single keyboard, the keyboard should not be "split" into two separate parts.

On the PSR-SX900 how you find and change the split point is different than on earlier Tyros and PSR models. Let's first look at how this is done on the SX900.

Changing the Split Point on the SX900 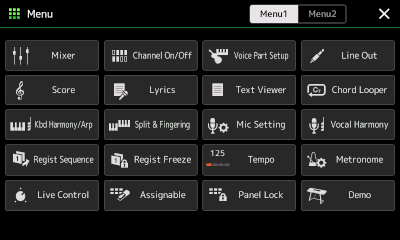 In this illustration, the left voice is not on and neither are the R2 or R3 voices. The Chord area is everything to the left of F#2. The R1 voice is played on the keys from G2 up to C6. 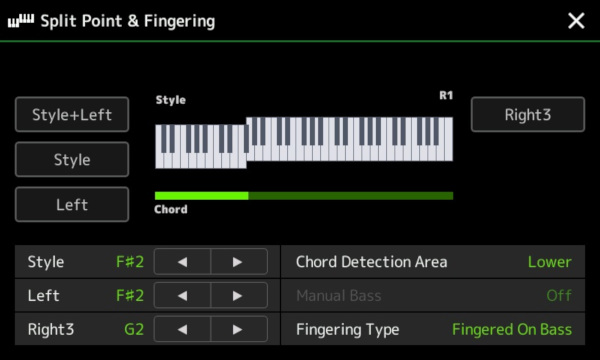 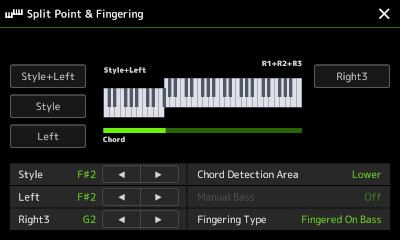 Here is another screen shot where the left voice is on and all three right voices are playing. If you wanted to move the split point to the right, say to B2, you can do that in several different ways. Hold down the "Split+Left" option and then press the key on your keyboard where you want the split to be. This changes the split point for both the left voice and the style. You can touch the arrows next to the Style, Left, and Right3 options and increase or decrease the displayed setting.

All the keyboards Tyros and PSR models have a key labeled [FUNCTION] that opens a menu of various keyboard features that you can control. The screen shot here shows the Tyros3, but all the Tyros and PSR-S keyboards have a similar set of choices under FUNCTION.

Note that you can visually check where the current split point is by looking at the upper right-hand corner of the MAIN screen. There you will see the current setting for the SPLIT. The "S" indicates the note that marks the split point for auto accompaniment (F#2). The "L" marks the upper range of the left-hand voice (also F#2 initially). Initially, the auto-accompaniment section is exactly the same as the notes used for the left-hand voice, but it doesn't necessarily have to be. The "R" indicates the lowest note available for the right-hand voice.

You can immediately jump to the SPLIT POINT screen by pressing the [DIRECT ACCESS] button together with the [SYNC START] button. Alternatively, use the FUNCTION menu to go to the SPLIT POINT screen. Use the buttons below the screen to change any of these points. Note that if you move the right-hand voice lower, the split point and the left-hand voice must always be below the right-hand voice, so you may wind up moving all three points by moving the R voice lower. Similarly, moving the Style split point higher will also bump up the L and R voices since neither can be below the S split point.

You can also use the buttons on the right side of the display screen to move the split point. For example, press the [F] button, next to the S+L option shown on the screen, and then press the actual key on the keyboard where you want this split to occur and this will set both the "S" and "L" points at that key.

At this point you could also try out the different variations of whatever style you are playing. Press the "B" Main button to hear the second variation. Similarly, try the "C" and "D" variations and try different chords in each variation. 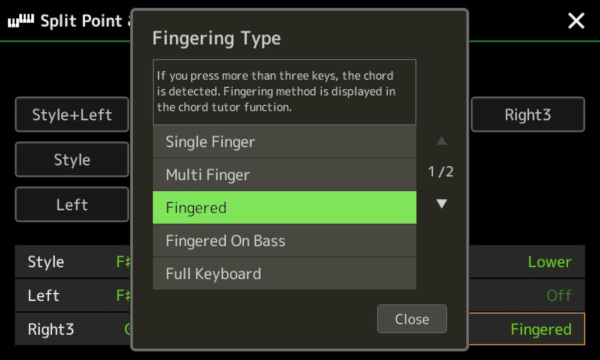 The Single-Finger method does not enable you to play a C major seventh (CM7) or C augmented (C+) or C major sixth (C6) or C diminished (Cdim) or C ninth (C9) chords. The single-finger method would work for very simple songs, but could not be used to play more modern tunes using fancier chords.

PSR-Tyros Chord Tutor - If you are not sure of what notes are included in any particular chord, there is a chord tutor available. On the Tyros and PSR models the chord tutor is on that CHORD FINGERING page (see above illustration.) Select the chord you want in the ROOT box (pressing the [#6] button) and then select the type of chord using either the [#7] or [#8] buttons. The notes for that chord will be shown on the keyboard in the illustration. If you use the chord tutor for root "C" and type "M7", the illustration shows the notes C-E-(G)-B. The "circled" G note means this note is optional for this chord, that is, playing C-E-B would be sufficient to indicate a CM7 chord.

PSR-SX900 Chord Tutor - The PSR-SX900 has a separate screen for the Chord Tutor. You find this option on Menu2. The Chord Tutor screen is shown below. In this screen shot, the selected chord is C Maj. The circles on the keyboard show the keys that trigger this chord. The graphic illustrates these notes on sheet music. Touch any root note and the type of chord to see the notes used to trigger that chord. 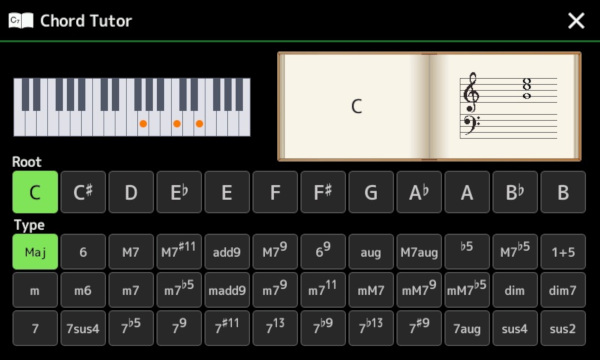 In this mode, which I personally prefer, you need to simultaneously press three or more keys to trigger a chord.  This means you can play a chord and then play single or double notes to add variety to the accompaniment voice without triggering a chord change.

This type is essentially the same as FINGERED except that the bass note used in the accompaniment is the lowest note you use in specifying your chord.  So if you wanted to play the C major chord while the bass played an "E", you would play the second inversion of the C chord, that is, E1-G1-C2, with the lowest note being the E.  In musical notation, you might see this chord entered as C/E, which means to play the C major chord over an E bass note. Of course, in this case, E is also part of the chord. But you will also come across chords like Bb/C, which means play the Bb chord along with a C bass, which is not part of the Bb major chord.

If you are used to playing piano arrangements, you may want to experiment with the FULL KEYBOARD mode where notes from both the left and right hand are used to identify the chord. There is also an AI FINGERED or AI FULL KEYBOARD mode that you can select. "AI" stands for Artificial Intelligence. The AI FINGERED is the same as FINGERED, except that a new chord can be signaled with less than three notes. The AI is used to figure out what chord you mean based on the previously played chord. Personally, I've avoided these "AI" modes since the more advanced chords, such as the 9ths and 13ths can not be selected and the chords that are selected can be very strange indeed.